Châteauguay wants to modernize the entrance to the city from Kahnawake and bring it “into the 21st century”. The city recently purchased two commercial lots at the corner of Saint-Francis and Industrial boulevards in order to realign them and intends to considerably densify this sector by allowing the construction of buildings with 10 floors or more. That’s something that the municipality has never experienced before.

“For some time now, the entrance into the city has appeared ugly to me,” says Mayor Eric Allard in an interview.

He explains that the gap between Industrial and Saint-Francis boulevards, which are both perpendicular to Saint-Jean-Baptiste Boulevard, does not help, especially in a context where the Industrial Park is expected to develop. “When you come from Montreal, you stop at the small end of the street to turn (onto Industrial Boulevard). It’s really not ideal. The realignment will not only solve this problem, but we will also make the entrance to the city much more attractive,” he explained. 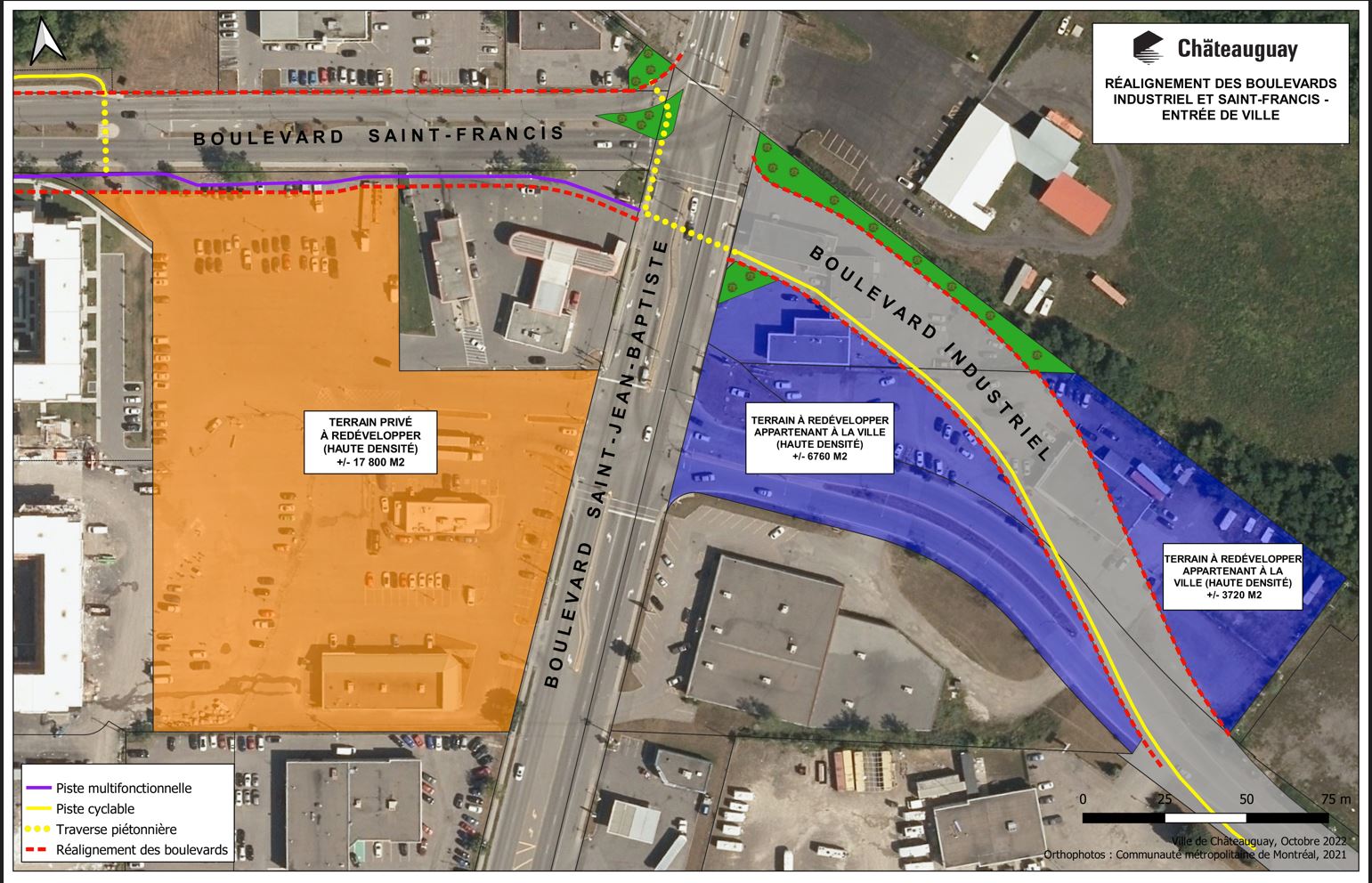 This project has been on the city’s agenda for a few years. The city took the first step this month by purchasing two lots in the area by mutual agreement for $8.5 million: the Shell gas station lot and the lot that includes the De Castris garage and used car dealership of the same name.

The city used the proceeds from the sale of other lands in its Industrial Park to purchase the land at the entrance to the municipality.

In the city’s proposed preliminary plans, Industrial Boulevard would connect to St. Francis Boulevard through these lots. The cost of constructing this new section is estimated at $20 to $30 million, including the $8.5 million for the acquisition of the two lots. 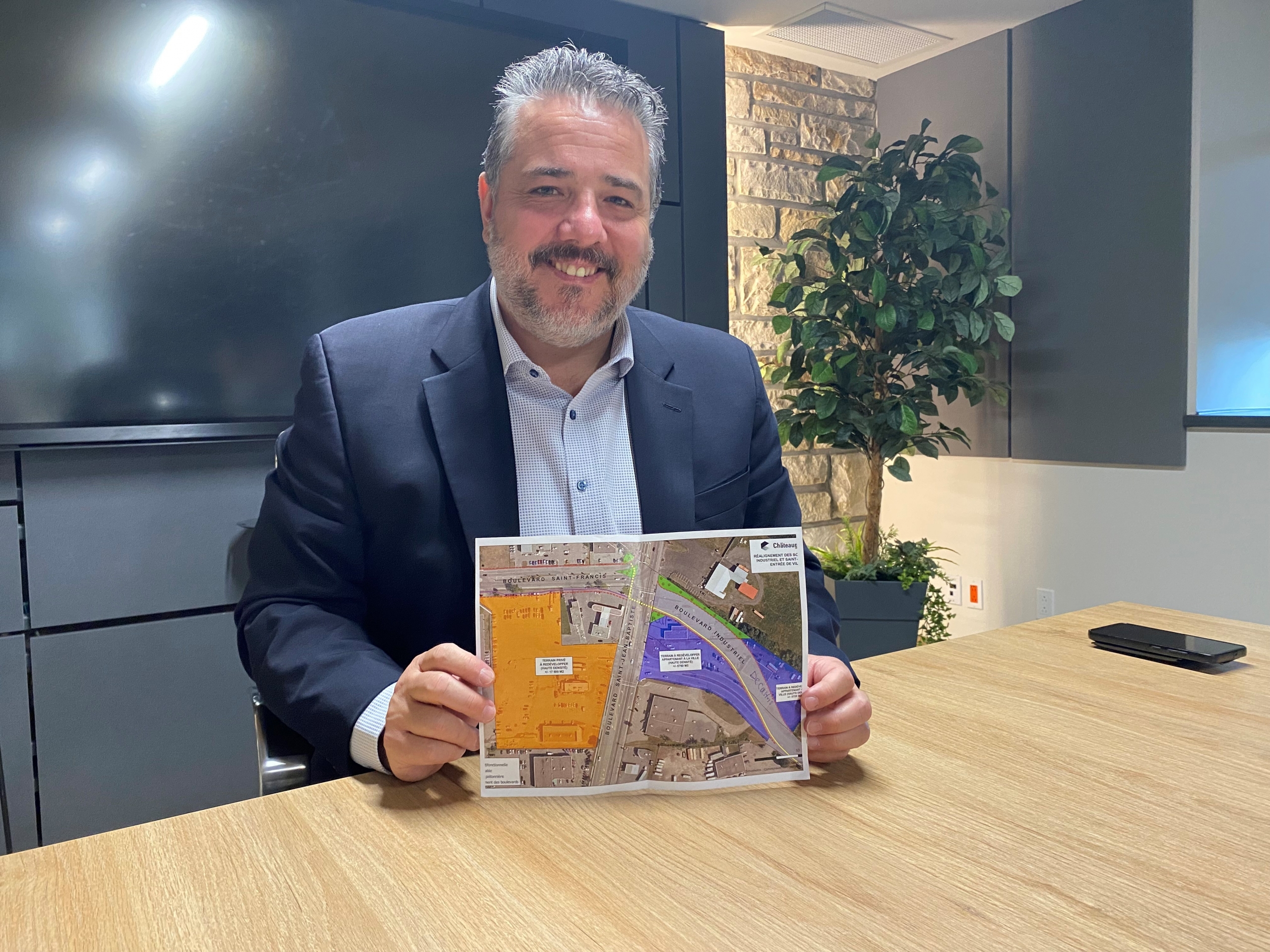 “For all the investment we’re going to make at this location, we’re going to get a return on our money in seven to ten years. This is a great business opportunity for the city. Not only does it improve the look of the area, but it’s also cost effective,” said the excited Mayor.

In parallel with this road project, the city council wants to literally transform the entire Saint-Jean-Baptiste Boulevard sector, between Saint-Francis Boulevard and Kepler Street, by developing a TOD-POD (transit-oriented development, pedestrian-oriented development) district, i.e., one that builds in height while providing local businesses and public and active transportation services.

“It may come as a shock to some people because we’re going to densify a lot,” Allard said. In recent months, the council has modified its bylaw to allow the construction of buildings with a minimum of 10 floors up to a maximum of 16 floors in this zone.

“Don’t think that there will just be big skyscrapers. There’s going to be a play of massing. The existing environment will be respected, so when you look at the other side and there is already residential buildings, we want it to fit in,” explained the city’s General Manager, Karl Sacha Langlois.

The portion of the land that will not be used to realign Industrial Boulevard may be used for this type of development, but other privately owned lots may be used as well. The city has established the orientations it wants to take in this neighbourhood: it wants a socio-economic mix, a commercial mix, more public transit, more green spaces and a modern design.

“We’re not just cramming buildings with people living in them. That’s really important. That’s not what we are doing at all,” the Mayor clarified. We’re very demanding in urban design and architectural design. Developers are aware and understand that. Primarily because it’s the entrance to the city but secondly because there isn’t much land left in the MMC,” added Mr. Langlois.

Mr. Allard says he has already met with a few “serious investors” for the TOD district. According to Allard, the two city-owned lots alone could represent $180 million in investments for developers.

Both men believe that Chateauguay must make this shift as it will generate more revenue for the city and help curb urban sprawl.

Q    Could this densification accentuate the problems of supplying drinking water?

A     We are currently working on upgrading and expanding the water production plant. When we get to the construction and the densification, we will be able to produce more water. It will happen at the same time.

Q    How does public transit fit into this project?

A     Exo needs to review the local network in Chateauguay. At the moment, they are focusing on the places that will be served by the REM, after that they are coming here to redesign the network in Chateauguay. That’s what is planned. We also need to think about other alternatives such as car sharing. It is certain that the people who live in this sector will not have unlimited parking.

2022-2023: Feasibility studies and plans and specifications

The TOD area could be constructed in parallel with the boulevard work.